Solidity on Replit: Diving into Web3 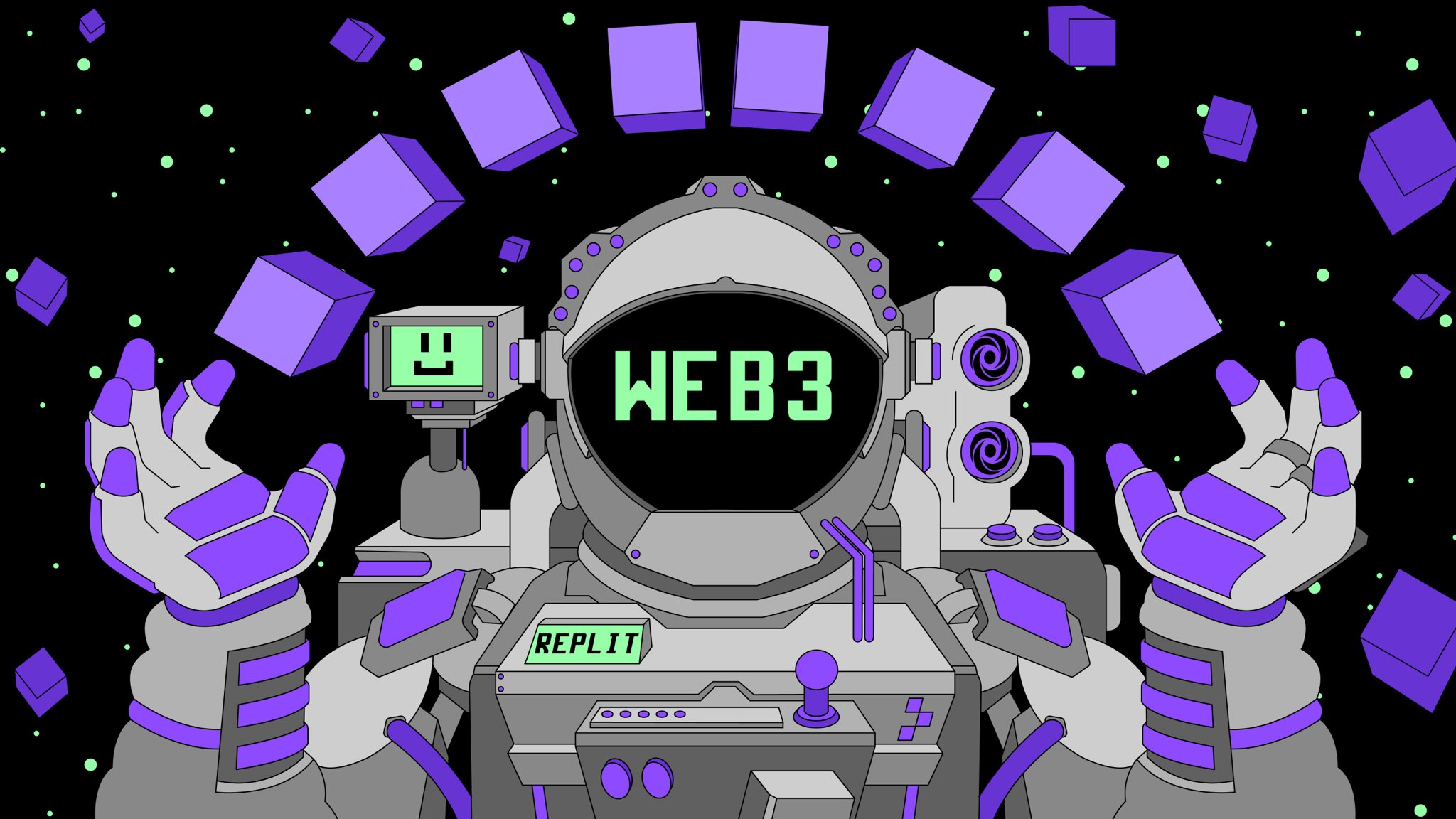 Today, we're announcing our official Solidity development template. Solidity is the language used to create smart contracts, which are programs that run on the Ethereum blockchain. This is important for the Web3 commmunity because there's finally an accessible and collaborative way to learn Solidity, which will unlock thousands of new developers in the decentralized web.

You can try it out by creating a new Repl and typing solidity in the search bar. Or, go directly to the template page to fork it or leave feedback. :)

Lowering barriers to entry is core to Replit. Everything we do is intended to make software creation easier, faster, and more fun. So when new infrastructure and communities (like Ethereum) gain momentum, it's our responsibility to help people create for that new technological universe. So, why not try to build the best blockchain development experience in the world?

Replit has a unique advantage here. Among other "web-based IDEs", Replit is a true general purpose computing environment. Every Repl you create is actually a Linux container, meaning everything we build sits on top of a fully functioning operating system. This gives us the flexibility to build basically anything we want. Almost any program or environment you can create locally, we can transform into a URL.

What this means is that we created a multiplayer smart contract development environment that instantly hosts your contracts in a ready-to-share app. In other words, deploy a smart contract in 60 seconds with your friends.

While building this environment, we talked with dozens of Web3 developers and companies. All of them shared that there's a flood of new people who want to learn to build, but the tools aren't great for teaching and prototyping. And after seeing thousands jump into game development with Kaboom, we knew we had an opportunity to introduce Web3 development to artists, designers, and every kind of digital creative. It's ironic that one of the most complex and rapidly evolving sectors of computing is inspiring a new wave of curious programmers with extremely creative backgrounds. Probably nothing.

As impressive as some Web3 products are, like Foundation, Zora, Rainbow, and Rabbithole, it's still very hard to create dApps (let alone regular apps!). The learning curve to even speak and think about Web3 fluently is also huge, from the confusing terminology to the shift in mental models needed to be creative.

Part of our thesis is that simplifying software development is a fundamental part of creating new economies. This is especially true for the emerging world of Web3, where there's an enormous amount of capital flowing through a handful of popular apps but the development experience is fragmented and plagued by subpar editors, APIs, and user interfaces. We still have a lot to build, but for our beta release, we focused on simplifying deployment so that new developers can focus on learning Solidity itself and getting new things out into the world. 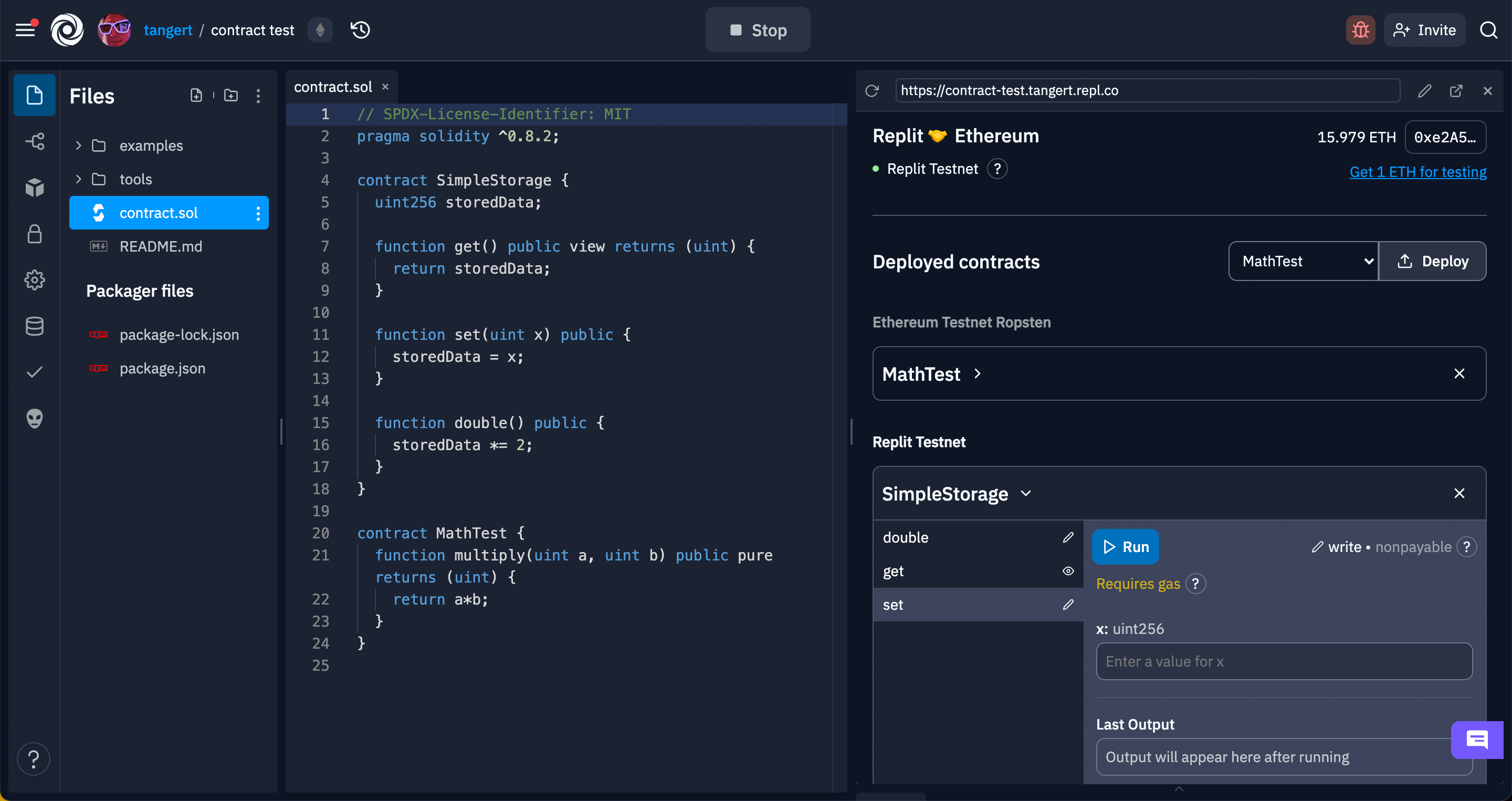 Live-editing, aka hot-reloading, is built into the editing experience. contract.sol will recompile whenever it's edited and will be available for deployment in the UI as soon as it's ready. As a part of live-editing, we also show you complation, deployment, and function testing errors directly.

We were running into limitations with other testnets, so we made our own. To add the Replit testnet to your wallet, just click the "switch to a test network" button in the deployment UI. To fund your wallet, click "Get 1 ETH for testing". No need to go to a faucet -- just request ETH straight from the UI. 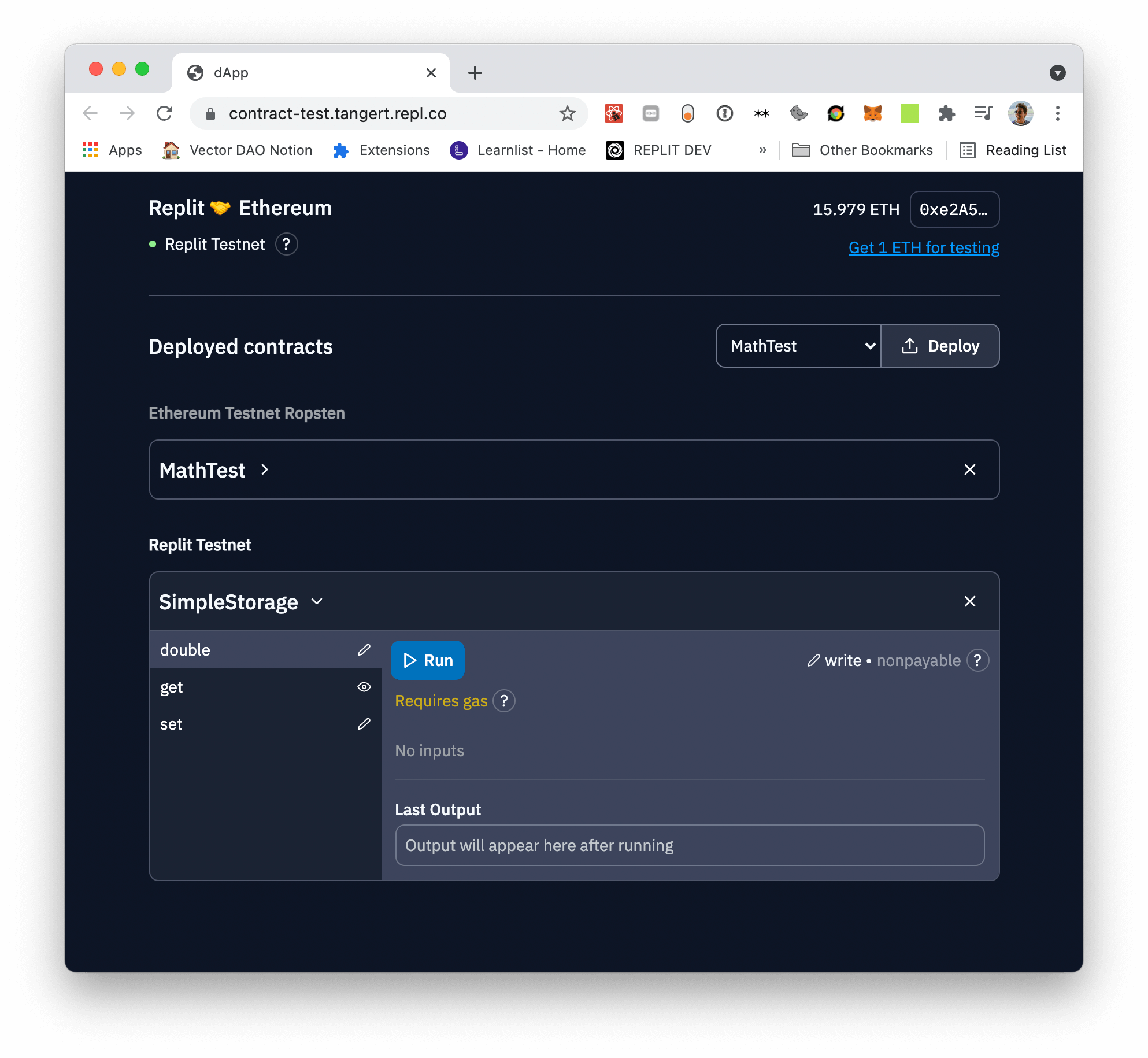 Your contracts are sharable because the deployment UI is actually a hosted app. You automatically get a link for your contracts you can send to people.

You'll be able to build your own bank, all kinds of NFTs, your own social token, voting contracts, and more. The only limit is your imagination and how many hours you want to spend googling.

How do I create a Solidity Repl?

Create a new Repl then type solidity in the search bar. :)

Or, go directly to the template page and fork it.

💧 Intermission: what do all these words mean?

This post isn't intended to be a self-contained glossary, but let's clarify a few things to make sure we're on the same page.

When we say "decentralized app" (or dApp for short), we mean that one person or organization does not directly control the data and users on that app. Most services you use today are centralized, meaning they control everything that happens inside of their apps and all of your information. They store and manage your logins, permissions, and can ban your accounts (and everything associated with them) on a whim.

With decentralization, we can build more equitable organizations and services that are collectively owned by their users. This doesn't mean that a decentralized social network, for example, would be completely unmoderated. It means that instead of someone's account getting flagged by execs behind a curtain, the community could vote on it in a public, transparent, and programmatically enforced way.

Web3 refers to the general direction the internet is headed in where services are decentralized and people own their digital lives without the oversight of huge companies-- from their social followings, to game items, art, access to communities, and more. You could imagine a decentralized Instagram that connects to your database of photos that you own. If they ever shut down, you still have access to everything.

The internet we are used to-- referred to as Web2, relies heavily on centralized servers (like Twitter hosting your tweets and Instagram hosting your pictures). People can post stuff to the internet but don't have real authority over it. Your digital identity is effectively managed by huge corporations.

Web1 largely refers to the internet before social networks were popular, when you could read content but not post. Having a voice on the internet was reserved for the technical clergy who could figure out how to even get something online in the first place.

Now, how do you build dApps? dApps are built on top of blockchains, which are networks of computers that work together to store and update data according to prespecified rules, which (in Ethereum's case) are written in smart contracts. Smart contracts are programs that run on general purpose blockchains, like Ethereum.

dApps usually consist of "regular" frontends (websites or mobile apps) that connect to smart contracts behind the scenes. You can think of smart contracts as the backends of dApps.

Other popular blockchains include Solana, Polygon, and of course, Bitcoin (which is largely non-programmable and mainly used as a store of value).

From a practical perspective, there are a few key benefits of web3 apps, both from the users' and the developers' side:

How we built this

This all took about a month. It started with Soren's tweet:

My goal today is to add solidity support to @replit.

I got the compiler working, just need to make deployments easy.

We knew that getting the Solidity compiler to work directly on Replit was relatively trivial, but making a magical deployment experience is what would set us apart.

After two weeks of prototyping on the side, we got a functional deployment UI working and beta tested with about 20 people, many of whom gave really great feedback.

And since then, we've just been refining small bugs, edge cases, and working on performance.

The initial prototype was spearheaded by Soren, who got a working MVP hacked together using solc and infura. Alex then took the lead on productionalizing Soren's MVP and getting it hooked up to a basic deployment UI.

The template can roughly be broken down into three parts:

This is an express + vite server that has hot reloading built in. Like we mentioned earlier, any time you change your contract files (or the UI!) it'll automatically reload without you needing to touch anything.

We store the ABIs (basically your contracts' metadata) in ReplitDB, which means that anyone who is invited into your Repl will be able to interact with the same contracts. Eventually we'll query the chain directly to retrieve all of your relevant contracts.

Under the hood, we are using Nix to run solc (the solidity compiler) and nodejs.

2. The deployment UI This is a single file React app. It's relatively straightforward, and the main libraries we are using to talk to the Ethereum blockchain are ethers.js and evm-chains.

Matt also helped us get our own Testnet setup, which lets you get test ether directly from the UI.

3. The contract file. All your contract code is simply written in contract.sol. You can create other solidity files, but the one that Replit uses for deployment is contract.sol.

Tyler led design on this and implemented the majority of the frontend for the deployment UI.

Our main design goal, similar to how we approached our Debugger, was to eliminate as much noise and fluff as possible. It's easy to just copy popular UIs like etherscan, but we really tried to work from first principles.

Our figma file for this was a huge mess, but sometimes that's how this stuff gets done. 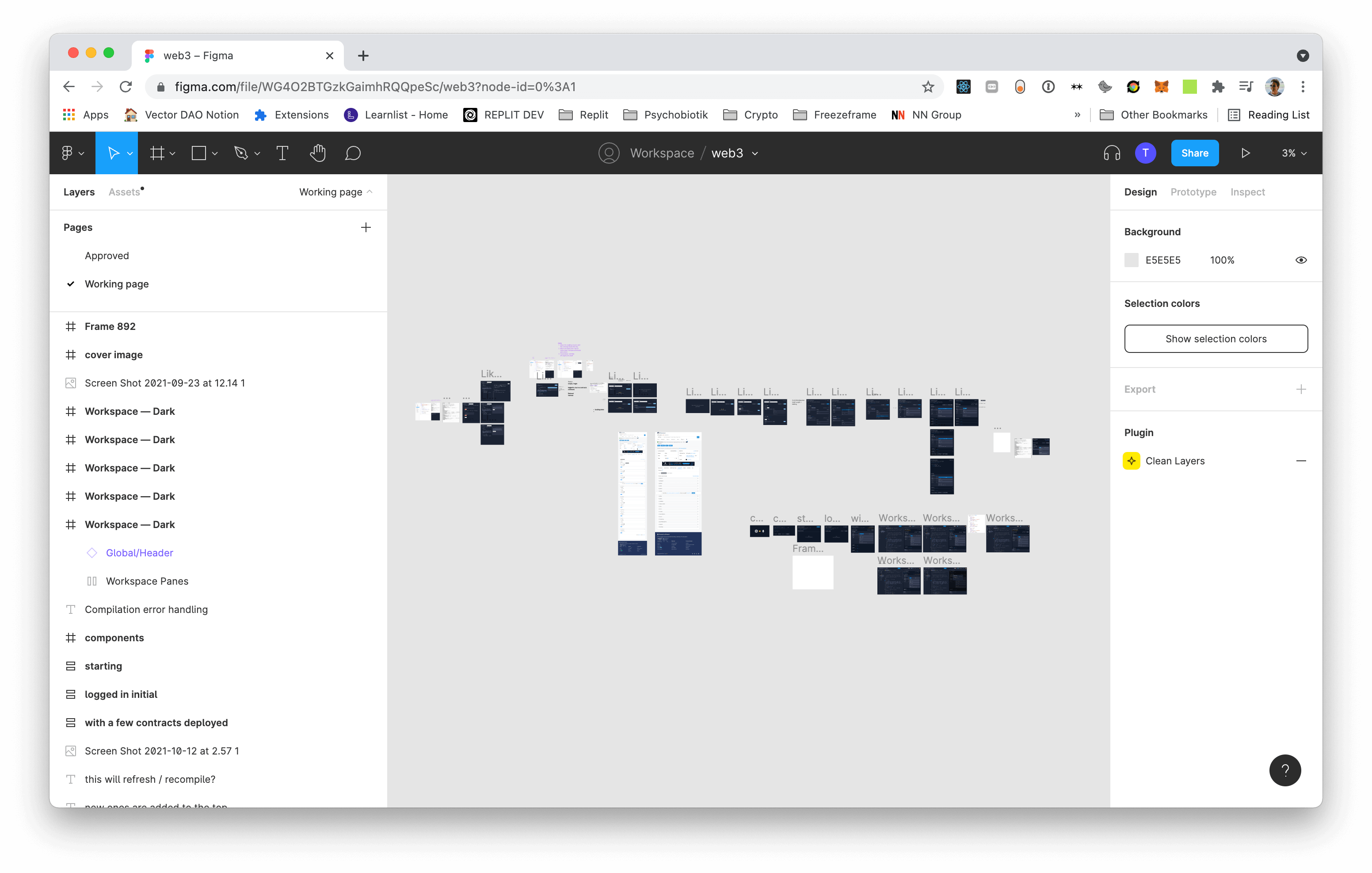 And here's our before / after of our MVP and our launch UI. Quite a long way! 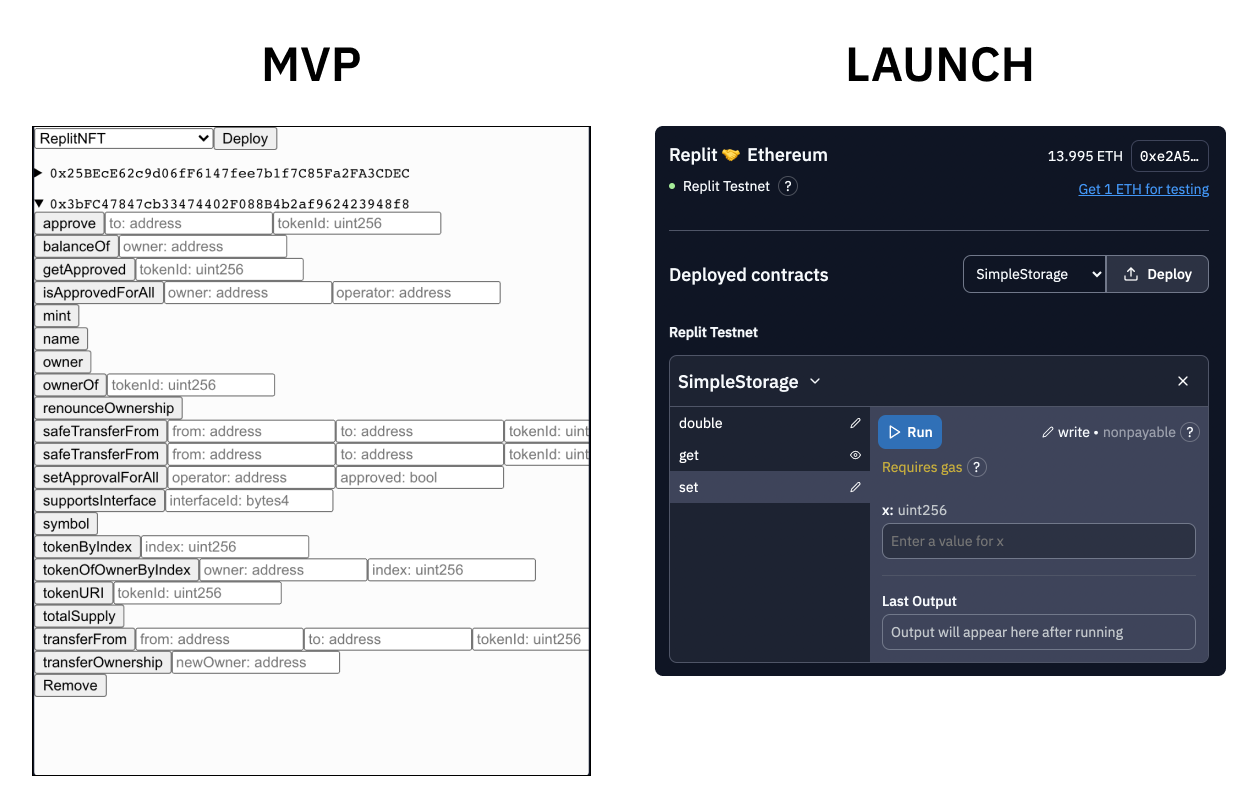 Side note: we wanted to make this look like it was an actual part of the Replit UI, so we took a subset of our (in progress) design system and ported it directly into the app.

Overall, this was an incredibly satisfying project to work on because it all took place inside Replit. We didn't build anything custom. This was literally a template that anyone could have created-- and, in fact, if you use this template, you can go in and edit the UI and server directly if you want to.

Replit and Ethereum have a surprising amount in common. So much so, in fact, that this tweet could easily apply to both:

Imagine a global compute network with millions of users building on shared programmable primitives. Where anyone from any device can get an environment they can mold to work for them and their customers. Where building a new app is as easy as remixing or joining existing apps.

Luckily, this is only the start and we're excited to see how Replit and Ethereum will co-evolve. There's a lot we can do from here, but we wanted to make sure our initial launch was simple and fast.

Here are some initial ideas:

We are also looking into creating more specialized templates for building NFT marketplaces with protocols like Zora and creating interactive content with groups like Vector DAO.

If you have feedback on the template, please leave a comment here. We will be actively developing it!

And of course, we're hiring. If working on the future of computing and Web3 interests you, feel free to apply and email us with any questions at [email protected] !

If you made it all the way to the end of this post, just remember: wagmi 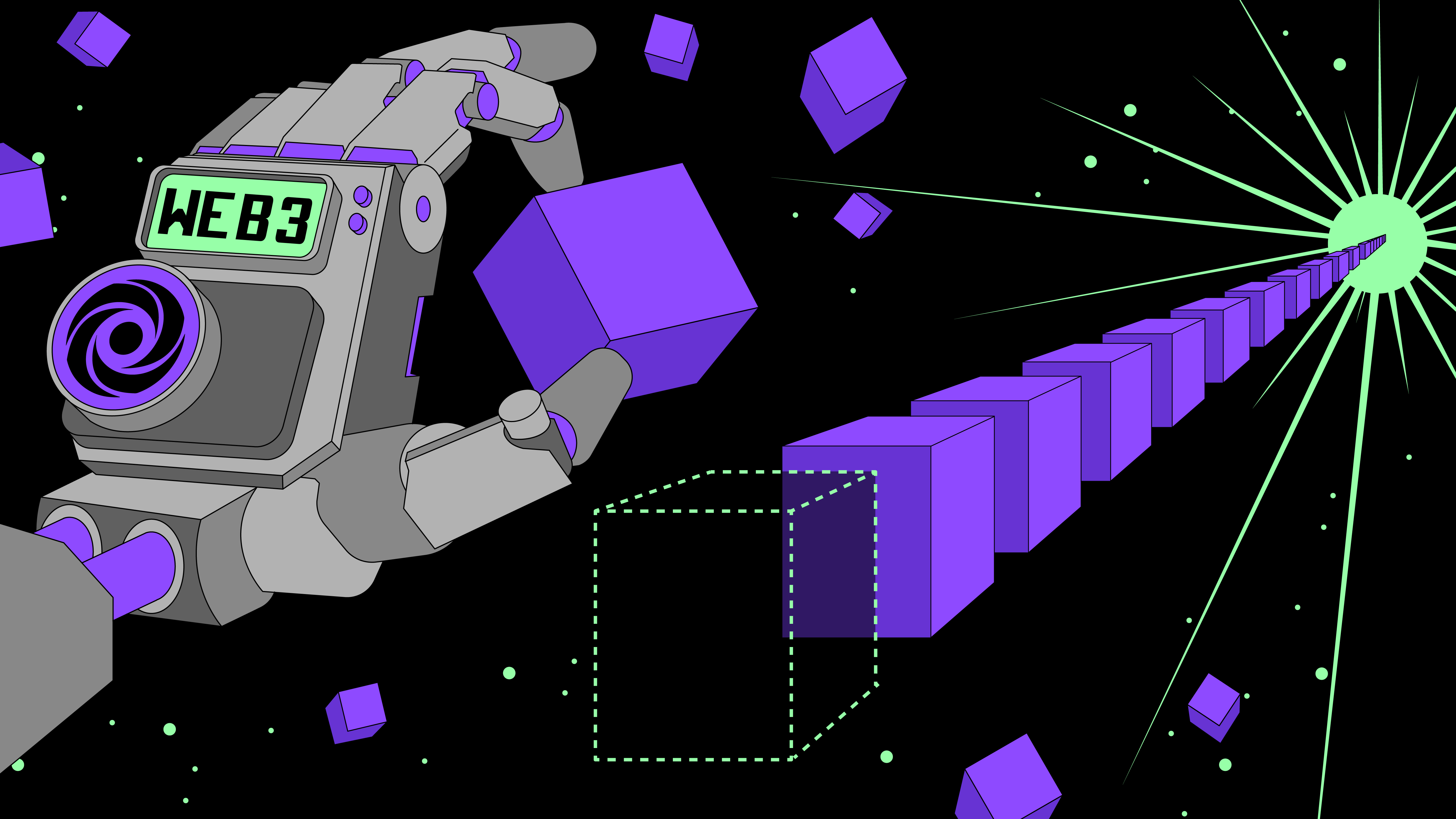 This is an incomplete list, but some interesting reads that should help give context to a few of the things discussed here.