At Replit, we have a small engineering and design team supporting millions of users. Our secret is investing in good tools that make us more productive. In this blog post we'll give you an insider look into how we implemented one such tool - the Replit design system (or RUI for short).

The project started as a collection of growth pains:

So, we set to build a design system that would help us scale. The high level goals:

Replit's frontend is built on top of React, a very popular library for building user interfaces. The React ecosystem has dozens of libraries and toolkits for making UIs. So many, that picking one is a hard problem!

Here's a list of libraries and approaches we have considered, and the pros and cons we weighed:

styled-jsx comes built-in with Next.js (which we also use), so most of Replit was styled with it.

styled-components was the first library that pioneered a "styled" API: making custom React components with CSS attached. Today, other libraries support a similar way of attaching CSS to components.

Tailwind has gained a lot of momentum and is very popular among front-end engineers. The utility classes seem unorthodox and hard to use initially, but once you get used to it it's actually very fun to style components with Tailwind.

Many design systems start from building a "universal React component", e.g. <Box> in Chakra UI. Other components then build on top of it, adding and removing some props.

Emotion (and many other libraries) support 2 ways of defining CSS:

Pros: TypeScript, can do some pre-processing with code;
Cons: hard to copy-paste, more keypresses to type out

In the end we landed on a system that's using Emotion with object-like styles, has a basic <View> primitive, and provides tailwind-like utility traits that can be mixed in.

The utilities are super useful and have replaced most of our old "layout components". For example, we have a utility called rcss.rowWithGap that aligns children components in a row with a gap between them. In the past, we used a special <VStack> component for that. Using the utility is much nicer because it can be mixed into component style without making the React tree more complex.

Here's another example. As you can see below, we can "mix-in" a bunch of shared styles (like interactive list item), and Emotion makes sure we can override bits we want to customize:

If needed, the new <Button> can also be styled with css prop: <Button css={{color: red}} /> (that's why we need to pipe className — Emotion is a little unintuitive here).

Our experience so far

It's been ~ 4 months since we started using RUI and our experience has mainly been very positive. Engineers love the new system and feel productive from day one.

The IDE support means that the APIs are discoverable and type-safe, so we have more confidence than ever shipping new code.

Alongside the design system we've also built an internal page that has component examples and documentation (generated from source code). 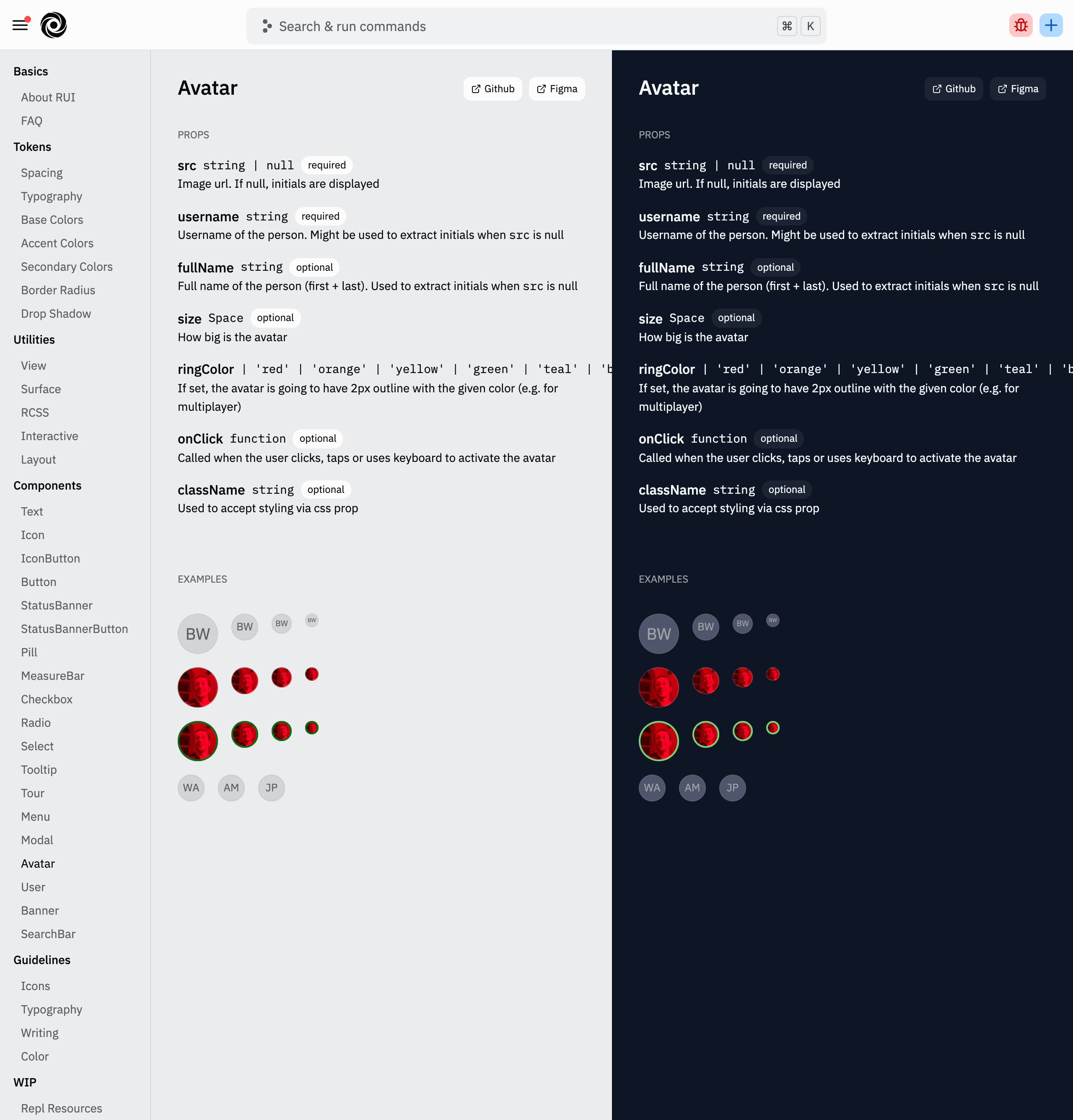 All our new code is written using RUI, and we opportunistically upgrade the old <styled jsx>, which results in much less code.

Big props to Ashlynn for brainstorming the API and implementation ideas and Barron for setting the design system principles principles and being a kick-ass designer-who-codes.

We expect that real success will only be achieved through close collaboration between system-sensitized visual and conceptual designers and design-centered software engineers and managers.
— Designing Visual Interfaces, 1995, Sun Microsystems