Today we're announcing the most-significant evolution of our platform — something we've been building towards for a long time that we're thrilled to share with you.

Introducing Multiplayer: code with friends in the same editor, execute programs in the same interpreter, interact with the same terminal, chat in the IDE, edit files and share the same system resources, and ship applications from the same interface! We've redesigned every part of our infrastructure to work in multiplayer mode -- from the filesystem to the interpreter.

This works with all the languages that work on Repl.it. All free and ready for you to use right now. All you have to do is login, create a repl, start a Multiplayer session, give a link to your friends, wait for them to join, and start hacking!

We started beta-testing Multiplayer last month. And while we think we're merely scratching the surface in terms of what can be done with it, a walkthrough of some of the emergent use-cases will give you an idea of how it works and how you can use it at your work, school, or for your side-project:

Last week user @marc_rosenberg hopped on our Discord server and asked for help with his Advent of Code work. After a bit of back-and-forth with other users, they decided to hop on a Multiplayer session. Marc shared a link and off they went: 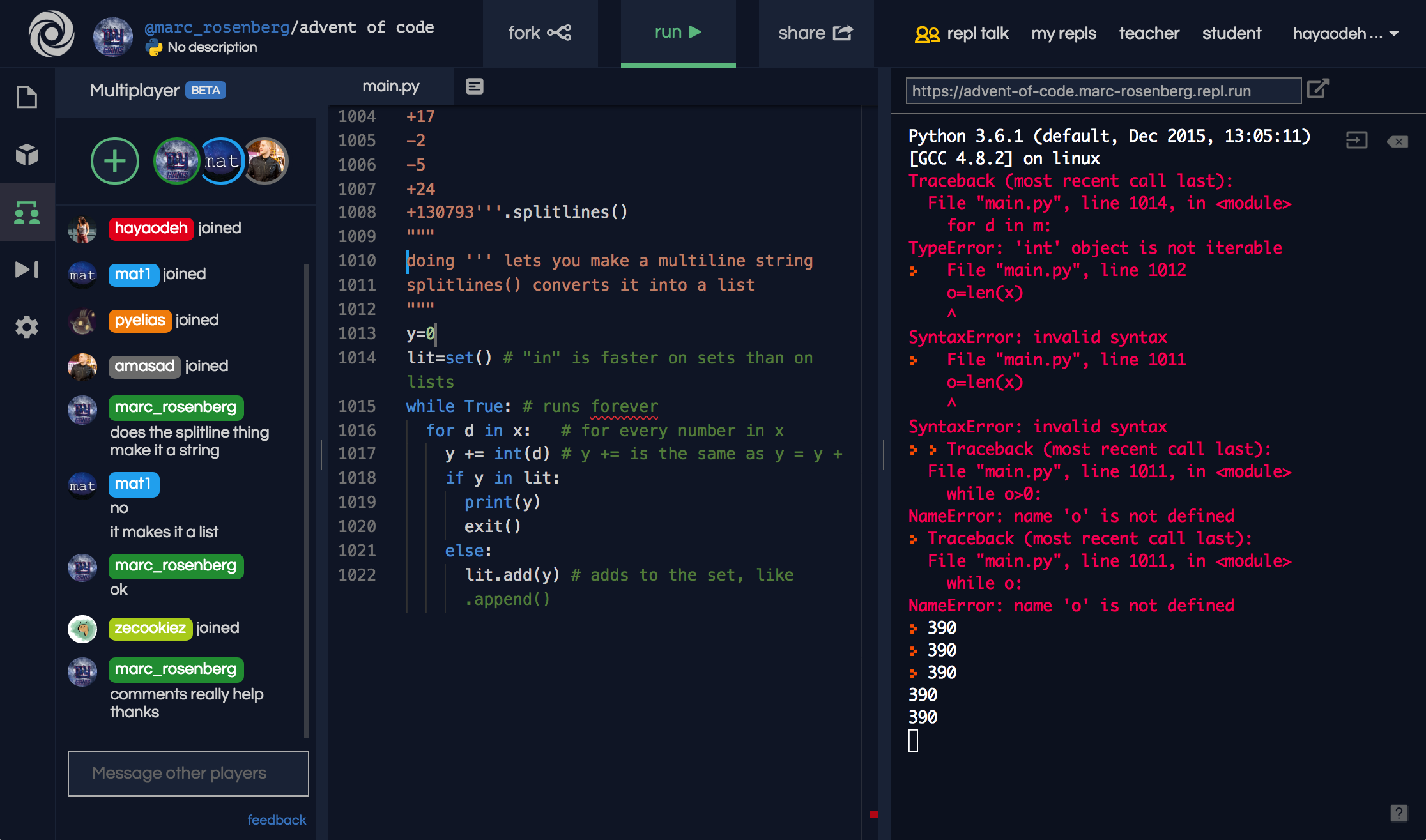 Four players joined and started helping him with his problem. Not only did they show him how to solve it, but they also leveraged comments and chat to teach him how it's done.

The fact that everyone shares the same compute infrastructure means they all see the same errors and the same output — this is crucial for collaboration and something that we've found to be lacking from existing IDE's that support "collaboration".

As part of our interview process at Repl.it (work with us) we have a phone screen where we hop on a Multiplayer session with a candidate and work on some coding problems together. Other people in the company can tune-in as well to give their opinion or to provide feedback for the interviewer.

The fact that it's shared repl allows the interviewer to write test cases for the candidate's program to verify its validity. It also allows both of them to see the results and errors in the terminal.

Repler @fractalbach wanted to teach his younger sister programming. Sadly, they were hundreds of miles apart which made it seem impossible (or at least suboptimal) to attempt. That is until chris discovered Multiplayer. Now they hop on the phone and crank open a session and start coding together.

Schools are also starting to explore Multiplayer in an educational setting. Some teachers split their students into groups to work on projects. This helps students stay engaged and makes the activity fun. Other teachers use Multiplayer to cast their coding session out for their students to follow and watch.

Repl.it users organize a 48-hour code jam every other month. For the last one, they decided to work on building databases. But this time they decided to make it more interesting and form teams to work with each other. This made the competition a lot more engaging and fun. The results were also quite impressive.

With Repl.it you can build and host web apps, bots, or websites. Users @mat1 and @Boopydoop worked on and shipped a discord bot together. They called it 4bit, and it makes it possible to play some rad games in discord such as Hangman, Simon Says, and even UNO!

Multiplayer opens up whole new levels of creativity in the community and makes it easier and more fun to teach and learn. Since we started opening up the beta the feedback has been rolling in non-stop and we've been very happy with community reception.

Finally, Multiplayer is built on solid infrastructure. We spent a lot of time trying to make the underlying system resources work in multiplayer mode because we think this feature, in the future, might transcend our websites and work with other IDEs and on different platforms. We're excited to explore the opportunities this opens up.

We'll write some more soon about the underlying technology but, for now, go forth and multiplay! 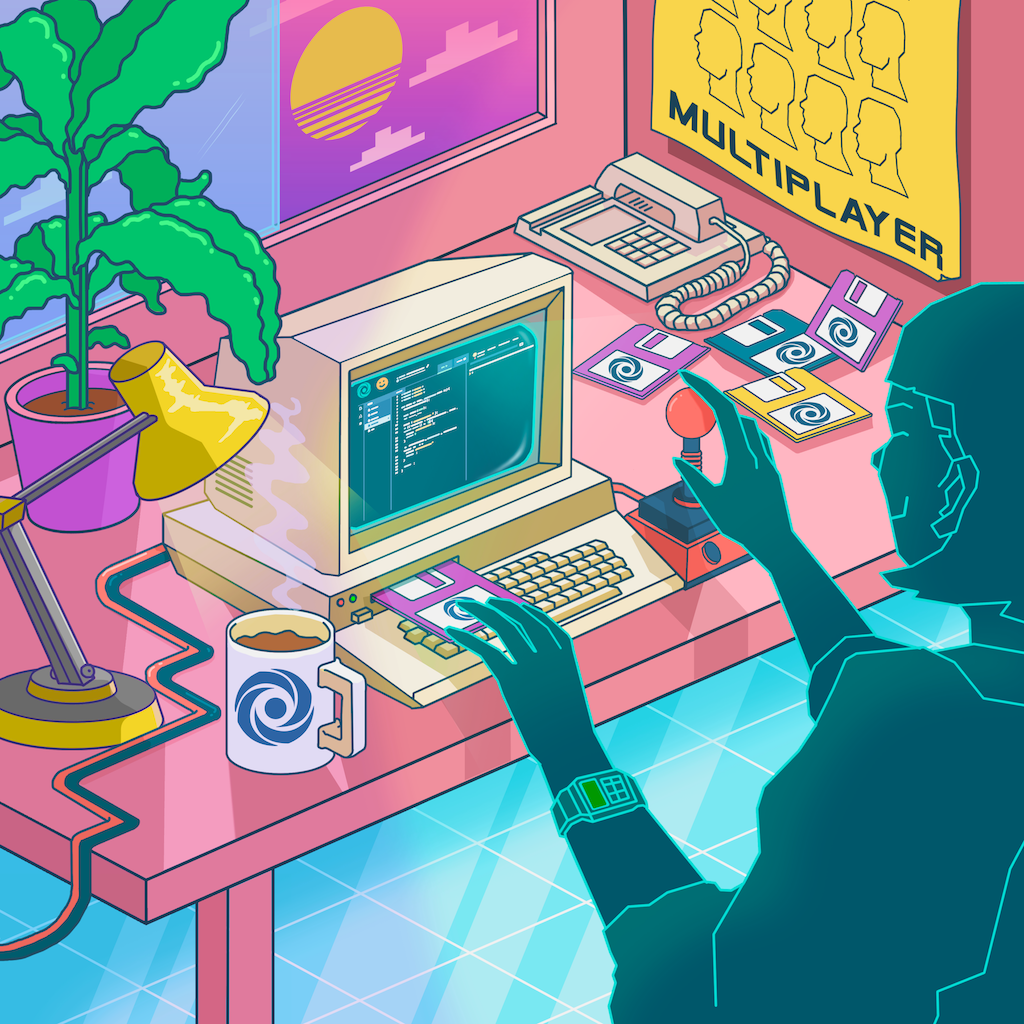