Getting Started with Solidity on Replit

Have you ever wanted to quickly prototype an idea, reproduce a bug, or share a code demo? Maybe you just got an idea for a new smart contract that allows users to bet on soccer teams, and you want to quickly prototype this and share it with your teammates. In all of these instances, Replit is the perfect solution.

Replit is a powerful online integrated developer environment (IDE) with a simple user interface that supports more than fifty programming languages. It also supports real-time collaboration, allowing for use cases like team member onboarding or hands-on learning for students.

It integrates seamlessly with GitHub, allowing you to create repositories from a repl or load a repo from GitHub without any manual setup. Replit also gives you the power to share demos through a link that can be accessed by any device, anywhere in the world.

In this article you’ll learn how to get started with Solidity on Replit. Solidity is a statically typed, curly-braces programming language designed for developing smart contracts that run on Ethereum. It can also be used by other blockchains for interoperability and easier migration.

Getting Started with Solidity on Replit

In this section, you’ll learn how to get started with Solidity on Replit and deploy your first smart contract.

To get started, you need to create a Replit account or login to your existing one. You need an account so you can create new repls and collaborate with peers.

After setting up your account, create a new repl.

First, select Solidity as the template and choose a title.

After initialization, you should be presented with a README.md file with a preview on the side. You can review the file for additional information.

This line is followed by two code blocks for smart contracts that start with the contract keyword. The first, SimpleStorage, is a basic smart contract that showcases encapsulation and data write operations in Solidity. The second, MathTest, is a contract that performs multiplication, but you can add other mathematical operations to it as well.

Go ahead and click the Run button at the top of the interface. 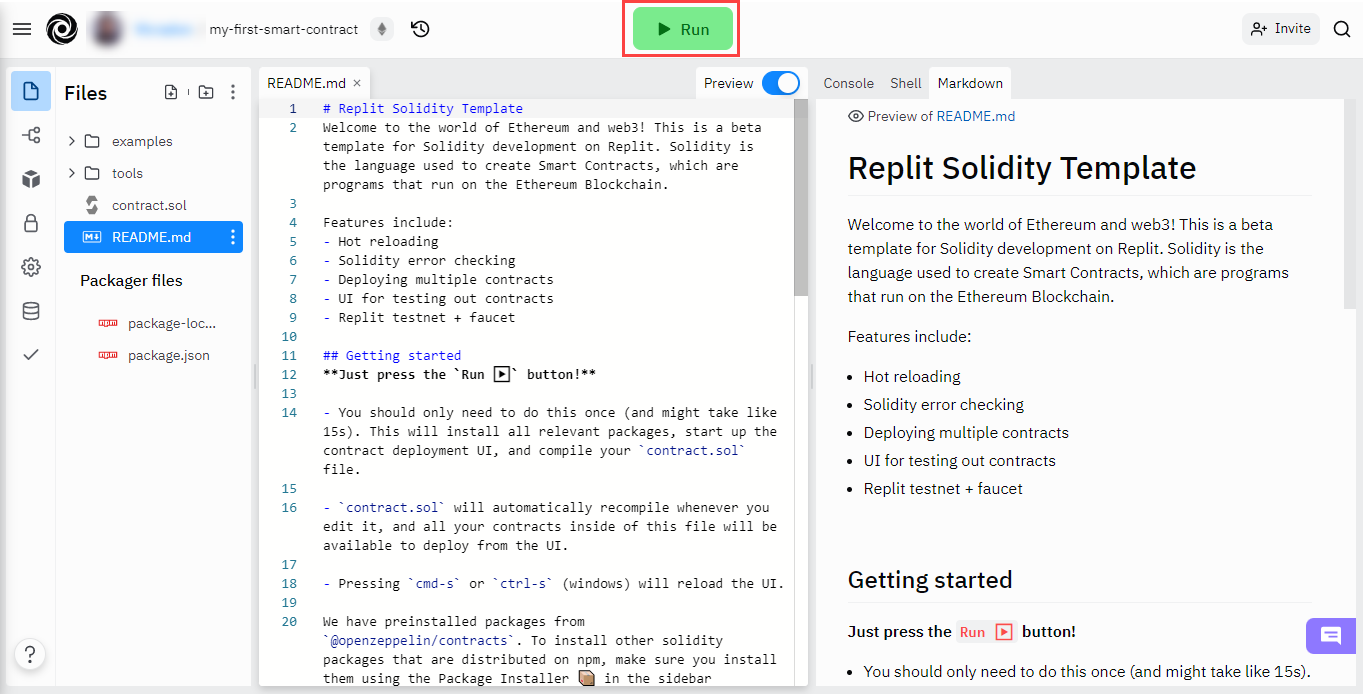 The run action will compile the contract.sol file and prepare the contracts specified in it for deployment. It also initializes a new UI view where you can deploy individual contracts. 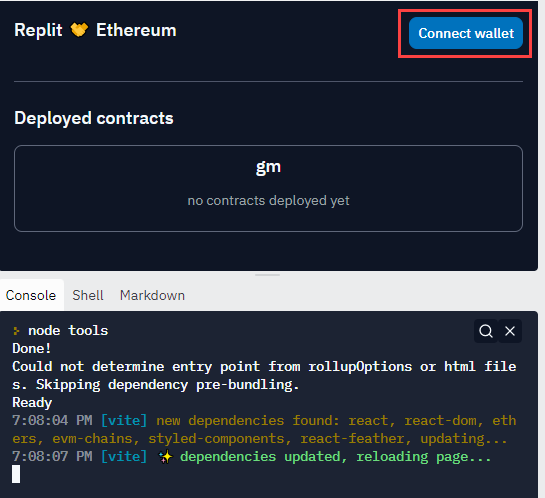 Do you notice the Connect wallet button in the image above? A wallet is needed to interact with the smart contracts in the repl. It’s similar to a regular wallet, which stores fiat currency, debit, and credit cards. However, it differs in its digital nature.

Your wallet's private key is the key used for signing transactions. It should never be made public or shared with friends. If your private key gets compromised, all the assets stored in your wallet can be wiped.

Decentralized applications (dApps) differ from regular apps in the way they handle user identity. A regular app may require your email and password or a Social Auth provider to identify you. However, a dApp only requires your wallet address. This address is a hashed version of your public key that makes it easier to share, and can be in the form of a string or QR code.

Wallets are usually hard to use on their own because you need to figure out the network you want to send the asset to, and use code to initialize and sign transactions. Luckily, an app like MetaMask exists to simplify the use of wallets on the Ethereum blockchain.

After setting up MetaMask, proceed by clicking the Connect wallet button on Replit.

MetaMask will prompt you to choose an account. After choosing an account and completing the setup, you need to add some Ether to the account. This will be used for deploying smart contracts on the network, which in this case is “Replit Testnet.”

The testnet can be used to test your smart contracts before they are ready to be deployed on the main Ethereum network.

Click Get 1 ETH for testing to add 1 fake ETH. Afterwards, click the Deploy button. This action will deploy the MathTest contract to the Replit Testnet. 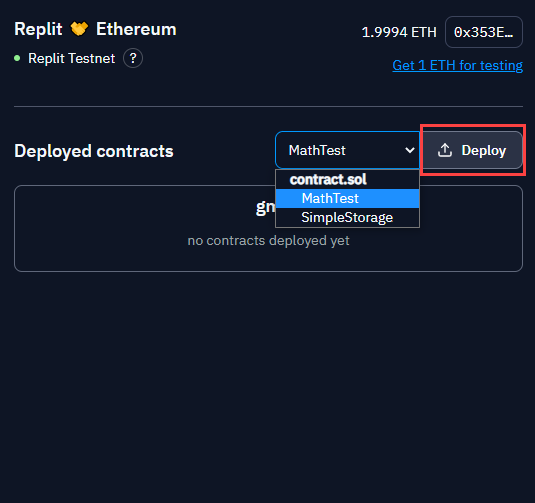 MetaMask will prompt you to set the gas fees and confirm the contract deployment. After confirmation, the contract will be deployed on Replit Testnet and will be available for use on the UI. Go ahead and test the multiplication function with different values. 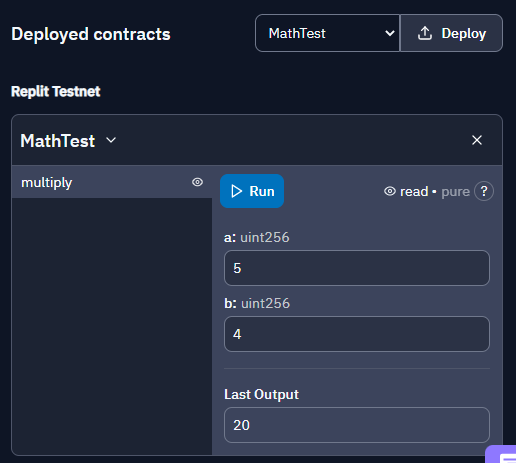 To complete the calculator, add the remaining arithmetic operation functions to the MathTest contract:

If you save the file with Ctrl-S, you will notice that the UI reloads and the values are reset, but the new functions do not reflect this change. This is due to the immutable nature of smart contracts. When you make a change to a contract, you have to deploy a new contract. To fix this, click the Deploy button again to deploy a new version of the smart contract. 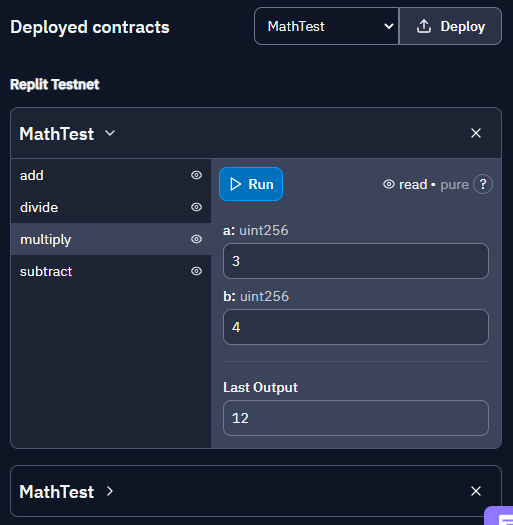 To get a better feel for the calculator, you can take some time to play around with different math problems.

Reading and Writing Data on a Smart Contract

The arithmetic functions in the MathTest smart contract are pure functions. This means they don't modify any data or read data from the contract.

However, the SimpleStorage contract contains a state variable called storedData. This variable can be set by passing a number to the set method, doubled using the double method, and returned by calling the get method.

You can deploy the SimpleStorage contract the same way you did the MathTest contract. After the deployment completes, take some time to explore the three deployed functions. If you hover over the read and write icons close to the Run button, you’ll see the type of function each contract implements.

The get function is a view function and only accesses the state variables in a contract, which in this case is the storedData variable. It doesn’t require gas to run.

The other functions are non-payable functions that require gas fees to run since they modify the state of the Ethereum network.

You should only store important data on the blockchain and ensure that all variables have the required types so that you don’t waste resources.

In this article, you were guided through how to get started with the Solidity programming language on Replit.

Even though web3 is still in its early stages, its decentralized online ecosystem based on blockchain has a lot of potential. Replit reduces the time required for web3 innovation with powerful features like team collaboration and version control, which are enabled by default on Solidity projects.