Getting Started with the SpaceTraders API on Replit

SpaceTraders is an online multiplayer game where you buy a spaceship, explore space, and set up trades. But it’s not just any other space exploration game—this one you play by manipulating a REST API. It’s a fun, interactive way for new programmers to learn and stretch their skills.

But where should you build it?

Replit is a collaborative, in-browser IDE that supports more than fifty programming languages and can be used on any device or OS. Replit supports GitHub integration, real-time collaboration, and the ability to create teams. It also has an active, global community of users you can collaborate with.

This tutorial walks you through how to use Replit to play SpaceTraders. Let’s take your first steps toward the complete and total domination of galactic trade, as the documentation says.

SpaceTraders.io is a unique, multiplayer game that’s played via a RESTful web API. You can play using the command line or a tool like Postman, or you can use any programming language you want to automate your API calls or create your own frontend for the game.

It’s great for learning how to use APIs, but it’s also just fun to play. The basic game mechanics are: players buy ships and travel through space to different planets, where they buy goods and sell them for profit.

This is achieved by hitting API endpoints using different HTTP methods. For example, to view a list of your ships, you send a GET request to https://api.spacetraders.io/my/ships. To buy a new ship, you send a POST request to the same URL along with parameters specifying the location and type of ship you want to purchase.

You can use Replit’s browser-based IDE to interact with the SpaceTraders API and play the game with a custom frontend client.

If you’ve never played SpaceTraders before, you’ll need to set up an account and get an access token before you begin.

When you first start playing SpaceTraders, it’s a good idea to follow their Getting Started guide. They suggest installing the command-line HTTP client HTTPie and using that to interact with the game API.

You can follow their instructions to generate an access token and claim a username. Continue following the guide and take out a loan, buy a ship, and buy and sell your first goods. This will help you get to know the game before you start building your client.

Now that you’ve set up your player account and have a basic understanding of the game, it’s time to use Replit to create a SpaceTraders client.

For inspiration, you can check out some SpaceTraders clients created by community members. You can build all of the functionality of the API into your client, but for the purpose of this tutorial, you will be focusing on displaying user and ship information.

First, create a new repl. You can code in almost any programming language you can imagine, but for this tutorial, you will be using React.

Search for React in the template search bar and choose the React.js template. Give your repl a name, and hit Create Repl. This will bring up a new workspace. 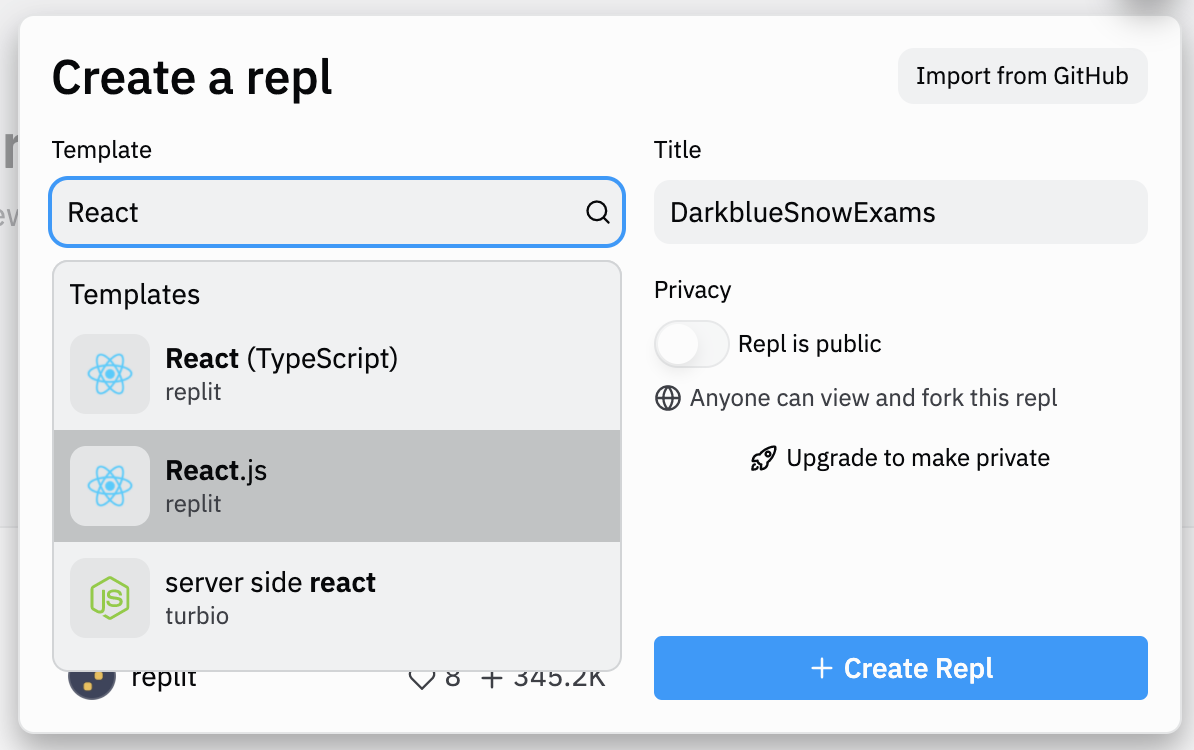 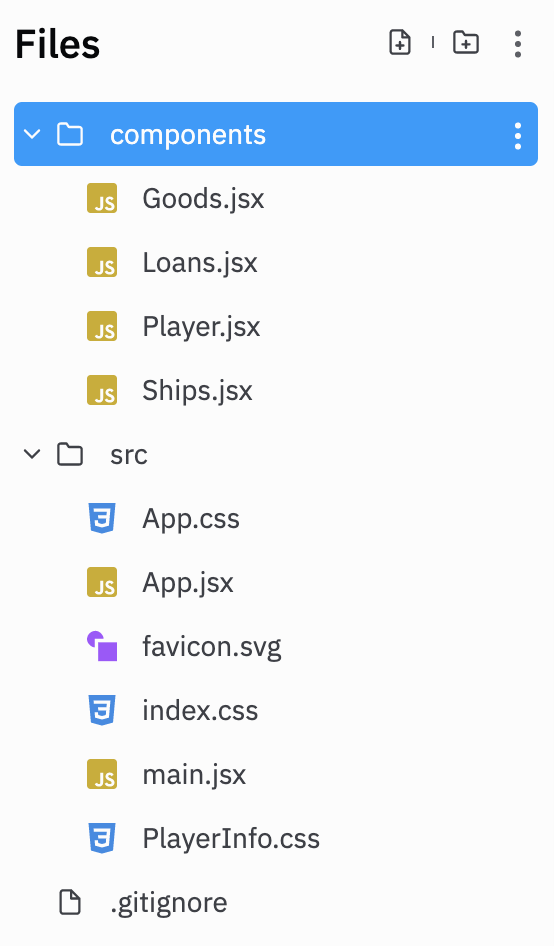 You can start to create some basic functionality by connecting to the SpaceTraders API to get player information. Start by sending a fetch request from the main App.jsx file to the /account endpoint, along with your access token as a parameter.

This is not secure, but it’s quick and easy and will do for the purposes of this tutorial.

In the example below, the useEffect hook performs the fetch request on page load, then the useState hook saves the object that is returned from the request.

Add an array as the second argument to the useEffect hook to make sure it doesn’t run repeatedly.

Next, create a Player.jsx file in the components folder. You’ll import this file to App.jsx, which will then return the Player component. The following code represents the entirety of the Player.jsx file. It’s a functional component that takes in the user information object as a prop from App.jsx and displays data from that object on the frontend.

You should now be able to see your player information displayed on the right side of the Replit workspace. It will look something like this:

Now that you’ve fetched and displayed your user info, you can move on to displaying other information about the game.

To display information about your ships, for instance, you will follow a very similar series of steps.

To get a list of your ships, you can send a GET request to https://api.spacetraders.io/my/ships?token=${token} from within useEffect in App.jsx. useEffect will now contain two GET requests: one for the user information and one for a list of ships.

Then you’ll use the useState hook to store the ship’s object in state, just like you did with the user object.

Finally, pass the returned object to a Ships component as a prop. Your new App.jsx function will look like this:

Your Ships component, which will be located in the components folder, will look similar to this:

Note that the ships are returned in an array, so you can map over them and display details about each ship separately. Take a look at the SpaceTraders.io API docs to see what each endpoint returns. 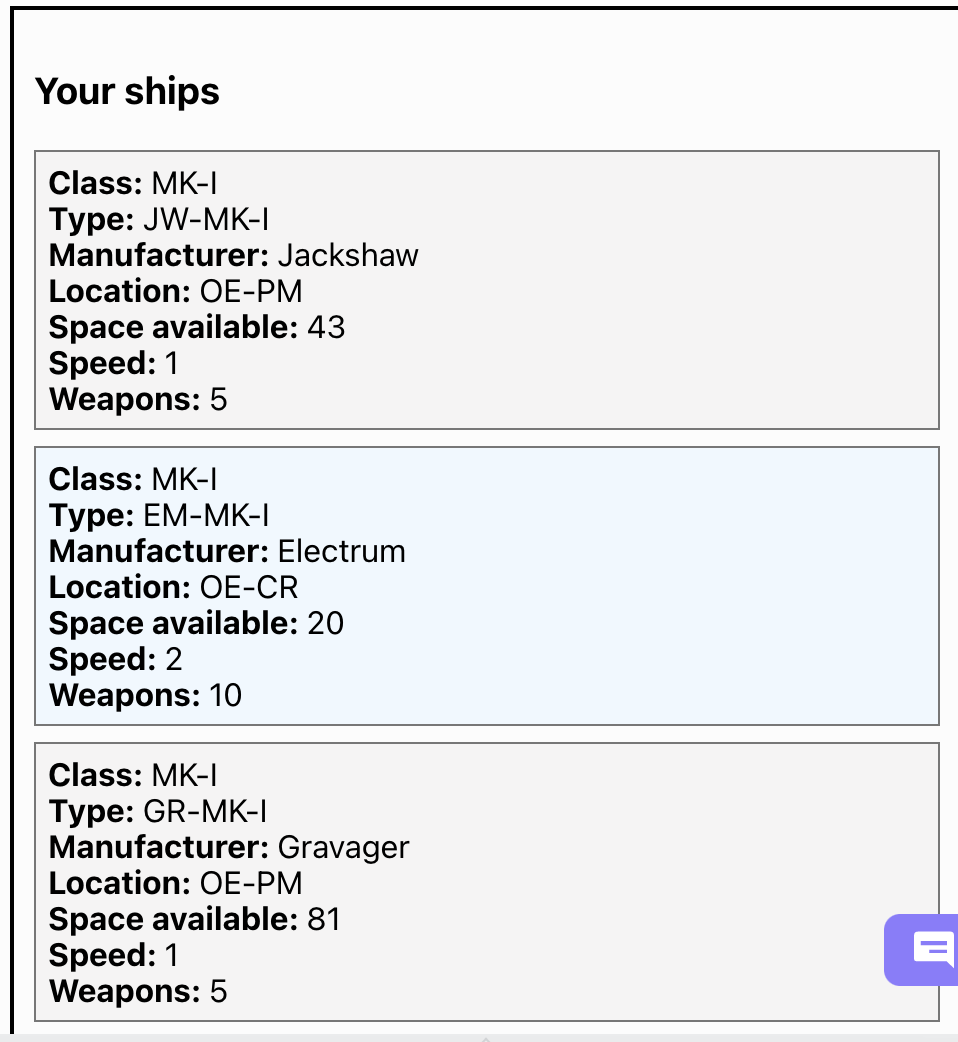 You can follow a similar workflow to display other data such as your loans, information about locations, the leaderboard, and so on.

Of course, there is more to SpaceTraders than just viewing your stats. You can set your client up to perform functions like purchasing ships, taking out loans, buying and selling goods, and more.

For example, to purchase a ship, you can use fetch to send a POST request to https://api.spacetraders.io/my/ships along with the location and type of an available ship. Very similar processes can be used for purchasing goods, creating structures, and submitting flight plans.

One of the wonderful things about Replit is its support for so many different programming languages, which means you don’t have to use React as we did in this tutorial. You can easily adapt this project for Python, vanilla JavaScript, or any other language you would like.

This article got you started with SpaceTraders, but there is so much more you can do and add to this project. You can add the ability to purchase ships and sell goods, create error handling, and make the UI look really slick. The fun part is customizing your own experience.